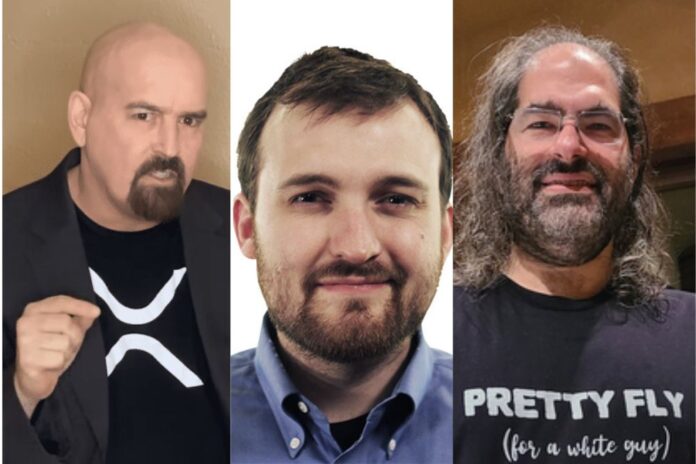 The litigation between Ripple, the US-based cross-border payments firm, and the United States Securities and Exchange Commission (SEC), is still ongoing and there have been lots of arguments between Ethereum and XRP proponents as the lawsuit progresses.

In a thread of tweets started by John Deaton, the lawyer representing over 75,000 XRP holders, Charles Hoskinson, the creator of Cardano (ADA), tried to point out that the involvement of Ethereum in the Ripple-SEC lawsuit may eventually hurt both XRP and ETH.

In the tweets that raised the heated conversation, Deaton stated that every supporter of blockchain desires regulation. He thinks if regulatory clarity with specific guidelines has been implemented in the United States since 2018, innovation, job creation, and tax revenue would have skyrocketed. He said this would have also brought about the implementation of consumer protections.

Damage of Healthy Relationship between Ripple and Ethereum

In the thread of tweets, Deaton also mentioned the collapse of FTX exchange. He said he expects Charles Hoskinson to have talked to regulators a way before Sam Bankman-Freid, the founder of FTX.

Deaton wrote, “I’m just posing questions. Like I said, you don’t have to assume Gensler was doing anything wrong behind closed doors with SBF to ask why did SBF have such incredible access to regulators. Charles should be in there talking to regulators way before SBF imo. That’s my point.”

In response to Deaton’s assertion, Hoskinson said he appeared before Congress this year on behalf of the crypto industry. He mentioned that what made things difficult is the allegation of bribery leveled against Joseph Lubin, a co-founder of Ethereum and founder of ConsenSys.

Charles Hoskinson tweeted, “I literally spoke before congress this year. I’ve engaged with regulators extensively. What doesn’t help is making an entire community believe that Joe Lubin bribed the SEC to go after Ripple. This madness damages any hope of a healthy relationship.”

I literally spoke before congress this year. I've engaged with regulators extensively. What doesn't help is making an entire community believe that Joe Lubin bribed the SEC to go after Ripple. This madness damages any hope of a healthy relationship

Deaton then told Hoskinson that he has no problem with Lubin seeking clarity or a regulatory free pass for Ethereum because Brad Garlinghouse was also doing the same for Ripple and XRP. He said his main focus is on William Hinman’s action.

In response, Cardano creator wrote, “A free pass for ethereum has zero material impact on the ripple litigation. Especially given that your argument is that it would be a security, but they were bribed to not make it one. So what [IF] both ethereum and xrp are securities?”

A free pass for ethereum has zero material impact on the ripple litigation. Especially given that your argument is that it would be a security, but they were bribed to not make it one. So what both ethereum and xrp are securities? Jesus Christ man.

Ripple CTO also shared his take on the topic.

Responding to Hoskinson’s assertion, David Schwartz said the regulator could have simply classified both XRP and ETH as securities or non-securities instead of playing a favoritism game.

“But to adopt the position that XRP is a security and ETH isn’t is a very different thing because it requires a level of precision that the other two positions don’t require. To adopt that as a rational position, you have to think particular things matter in particular ways.”

Cardano creator argued further that the SEC adopted the non-security position because by the time they could intervene, “ethereum [already] had a huge ecosystem of dapps, many VCs, tons of billionaires with political capital, and ran proof of work, which bitcoin got a pass on.”

Hoskinson then concluded that if Ripple had built a decentralized application (Dapp) ecosystem, the SEC could have treated XRP as the two largest cryptocurrencies, Bitcoin (BTC) and Ethereum (ETH).

“Had you guys followed codius through to its logical conclusion and built a dapp ecosystem, xrp would have gotten a pass. This wasn’t bribery. It’s reality. Regulators pick the path of least resistance,” Cardano creator stated.