Since the burning of ETH started on 5th August 2021, following the London hard fork that came along with the implementation of the Ethereum Improvement Proposal (EIP) 1559, nearly $1 billion worth ETH has been burned or taken out of circulation. 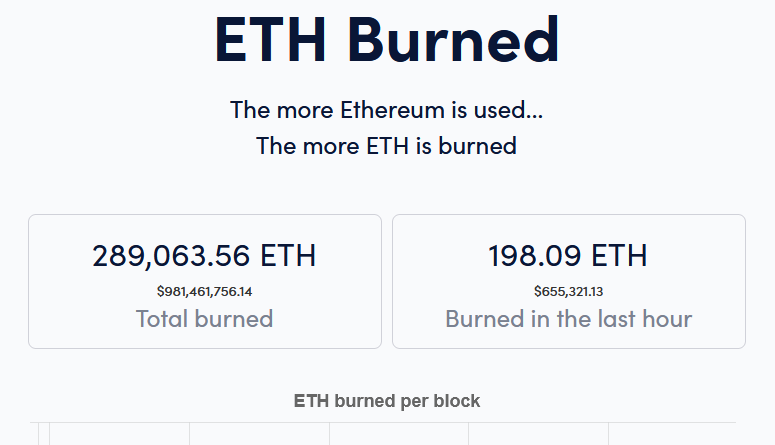 This can be attributed to the fact that simple fees briefly reached $150 at one point during the dYdX airdrop, which cost about $1,500 to claim. Things have now become normal with simple fees at about $3. This implies that the rate of burning ETH varies depending on network demand.

The rate of burning may also depend on the level of usage of second layers which could take out some transactions that otherwise would have burned ETH.

Lark Davis: The Economics of Ethereum (ETH) Are Rocket Fuel

Lark Davis, a popular crypto pundit, has recently stated that the current economics of Ethereum (ETH) is rocket fuel, referencing the nearly $1 billion of ETH already burned due to the implementation of EIP-1559. He added that the much-anticipated event called The Merge will boost Ethereum economics even more.

Lark Davis tweeted, “We’re almost at a billion dollars of ethereum burnt due to EIP 1559. Thus there has been a billion less in sell pressure from miners. The economics of Ethereum are rocket fuel, and it will only intensify when The Merge happens and we switch from mine and dump to stake and save.”

CryptoQuant CEO Gives Reasons Why Ethereum (ETH) Is On the Pace...