HomeCryptocurrencyBillionaire Mark Cuban: DogeCoin Has More Applications Potentially Available to it Than...
CryptocurrencyNews 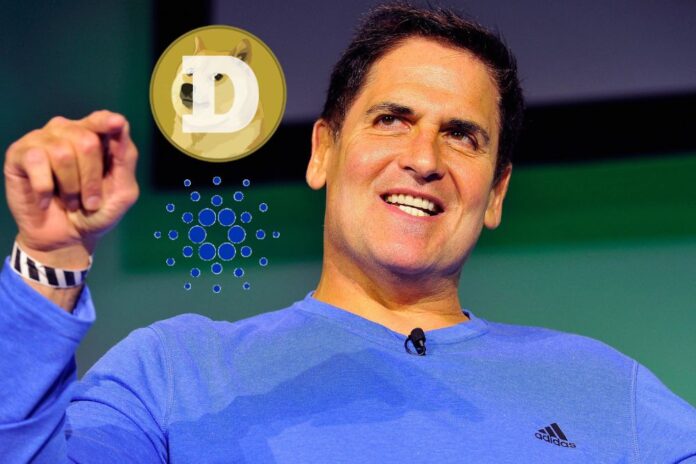 Billionaire Mark Cuban claims that DogeCoin, the flagship meme token project has more applications potentially available to it than the popular smart contract platform, Cardano. According to him, crypto and blockchain technology presents a new way to do business thereby disrupting existing businesses.

The prominent crypto advocate and investor made this statement in a recent interview with Altcoin Daily. As revealed in the YouTube video, Mark Cuban aired his excitement about cryptocurrency, blockchain technology, and thoughts about popular projects like Ethereum, Cardano, and Dogecoin.

“I still think Dogecoin has more applications potentially available to it than Cardano. The opportunity for Cardano was greater until DOGEcoin really becomes a platform for applications, Mark Cuban commented. Cardano (ADA) is the 7th largest crypto by market capitalization while Dogecoin (DOGE) is the 11th largest crypto at the time of writing.

This statement further reiterates Mark Cuban’s strong support for the leading dog-themed token. The famous billionaire and entrepreneur has always been a supporter of DOGEcoin alongside the Tesla CEO, Elon Musk.

Elon Musk recently said that the capability of Dogecoin in terms of transactions is much higher than that of Bitcoin (BTC), the largest cryptocurrency by market capitalization.

Cuban’s opinion has been met with several disagreements from members of the Cardano community. First, Charles Hoskinson, the face of Cardano (ADA) made a tweet, displaying mockery in response.

A certain Cardano community member, Lex Blazer wrote; “Haha…I thought the same. Mark Cuban still seems to have a 2019 impression of Cardano or something. Sure, the Smart Contract rollout hasn’t been a massive catalyst…but how can it be in an aggressive downtrend for all of crypto?”

Haha…I thought the same. Mark Cuban still seems to have a 2019 impression of Cardano or something. Sure, the Smart Contract rollout hasn't been a massive catalyst…but how can it be in an aggressive downtrend for all of crypto?

Speaking on Ethereum, the founding member of the first commercial streaming company, noted that the various applications of the Ethereum blockchain in niches like decentralized finance (DeFi) and non-fungible token (NFT) over the years are what made Ethereum valuable.

Therefore, he said, “where Ethereum becomes valuable again is when the applications are there.”

Meanwhile, the IOG team which is tasked with the development of the Cardano blockchain is on course to make the smart contract platform more scalable and interoperable. However, the Cardano Vasil upgrade has been met with several holdups and postponements. On the other hand, the Merge upgrade on the Ethereum network is planned for September 2022.