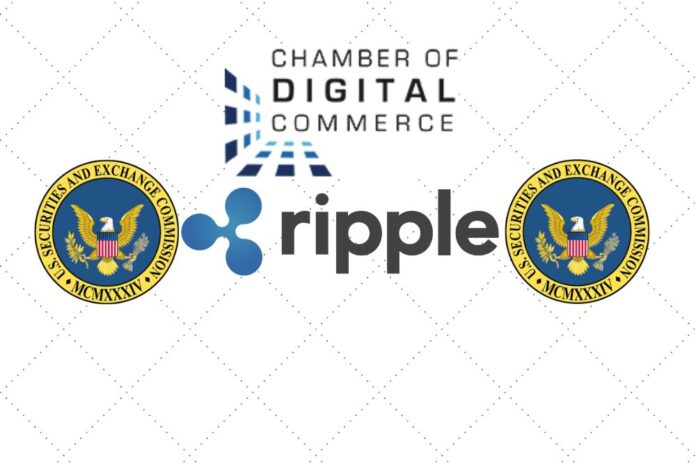 Since the SEC lawsuit got underway, Ripple has not received as much support from cryptocurrency-related projects as many had anticipated. However, earlier this week, Jeremy Hogan, a partner at the legal firm Hogan & Hogan, announced that the Chamber of Digital Commerce, the largest blockchain trade organization in the world, was going to step in the lawsuit between Ripple and SEC.

According to a tweet from attorney Hogan, “The Chamber is wading into the Ripple v. SEC case.”

The world’s top blockchain trade organization, the Chamber of Digital Commerce, requests permission to file an amicus brief in the current Ripple vs. SEC lawsuit.

The Chamber of Digital Commerce sent copies of their brief amicus motion, memorandum of law, and a statement from Lilya Tessler, the brief amicus attorney, to Judge Analisa Torres in response to a request.

Chamber of Digital Commerce’s Position and Interest in the Matter

The Chamber of Digital Commerce stated that its dedication to supporting the growth of digital assets and the blockchain industry is why it is interested in filing an amicus brief in the lawsuit.

The Chamber stated that although it cannot determine whether the sale of XRP is a security, it is keen on ensuring that the legal framework for digital assets supporting an investment contract is clear.

According to the Chamber of Digital Commerce, maintaining this difference is vital to building a predictable legal environment via a technology-neutral standard, which the Court has the power to do.

The Chamber of Digital Commerce claimed that due to its vast experience in addressing the applicability of US securities laws in the blockchain area, it should be permitted to file an amicus brief in the lawsuit.

The organization also argued that its request should be granted since it occupies a special position because it is unaffiliated with any of the parties in the lawsuit.

It is noteworthy that the Chamber said that its amicus brief will concentrate on a different viewpoint from the parties, which is the legal norm of the court’s ruling in creating a precedent for the crypto industry ever since.

The Chamber concluded by saying, “For the preceding reasons, the Chamber respectfully requests that this Court grant its motion for leave to file in this case the amicus brief attached as Exhibit A to the accompanying declaration of Lilya Tessler.”

The Chamber’s involvement in the action was first made public last week as a result of a joint proposal submitted by the parties to handle all sealing matters pertaining to summary judgment.

Attorney Jeremy Hogan believes that the Chamber will argue that while the sale of XRP could have been a security, the token is not fundamentally a security, even if that may have been the case in the Telegram v. SEC lawsuit.

The Chamber is wading into the Ripple v. SEC case.

Expect something similar to what it filed in the Telegram case and the argument is that although the SALE of XRP might have been as a security, the token is not inherently a security.