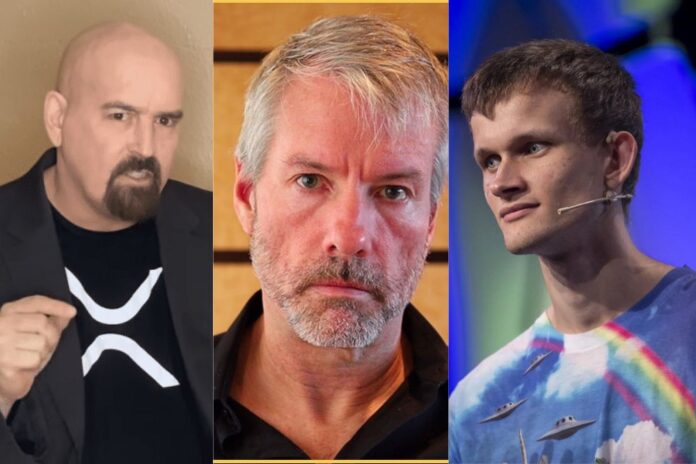 Ethereum co-founder Vitalik Buterin and other members of the crypto community like John Deaton, a staunch supporter of Ripple, have slammed Michael Saylor over his comments about altcoins.

Following the disclosure of a Youtube video, where Michael Saylor, the CEO of Microstrategy, made some comments about altcoins, founders of crypto projects and other community members have voiced their disapproval.

First, he implied almost everything other than #BTC is a security.

“all the legitimate talent is working in the #Bitcoin ecosystem”

“if your honest ethical and competent you would be building on the Lightning ⚡️ Network.”

In the interview session, Michael Saylor argued that all cryptocurrencies apart from Bitcoin (BTC) are securities, devoid of sound ethics. Particularly, the Bitcoin maximalist asserted that Ethereum (ETH) is unethical, citing that its genesis infringed securities laws.

In addition, he said, “all the legitimate talent is working in the Bitcoin ecosystem, and if you are honest, ethical, and competent you would be building on the Lightning Network.”

These comments by the CEO of Microstrategy have been met with several reactions from the entire crypto community. Reportedly, Microstrategy holds the largest volume of Bitcoin as a corporate firm, with over 129K BTC on its balance sheet.

While some say Michael Saylor has the right to his opinions, Ethereum co-founder and John Deaton, the attorney representing XRP holders in the ongoing Ripple-SEC lawsuit have shown their disagreements.

Why do maximalists keep picking heroes that turn out to be total clowns? https://t.co/lVhEVbfBbD

In response to his attack on ETH, Vitalik Buterin has indirectly called him a ‘total clown’, in a recent tweet. On the other hand, John Deaton noted that Saylor’s understanding of what makes a digital asset ‘security’ is deeply flawed, and his ethical comments absurd.

Saylor basically asserts that if you are aware of the law then you would ONLY build on #Bitcoin b/c the rest of the shitcoins are securities.

Saylor’s analysis of what constitutes a security is deeply flawed – which is quite surprising, considering how intelligent he is.