Ethereum’s big run that commenced at the beginning of October has been halted with the global crypto market correction that hit the cryptocurrency industry at the start of the week. However, according to on-chain data made available by Glassnode, crypto bulls a seizing the opportunity to increase their positions.

As revealed by the Ethereum exchange outflows indicator, traders and investors are currently taking their funds away from crypto exchanges like never before.

According to Glassnode, the volume of the outflows reached over $100 million, which is a record high as far as the Ethereum network is concerned. 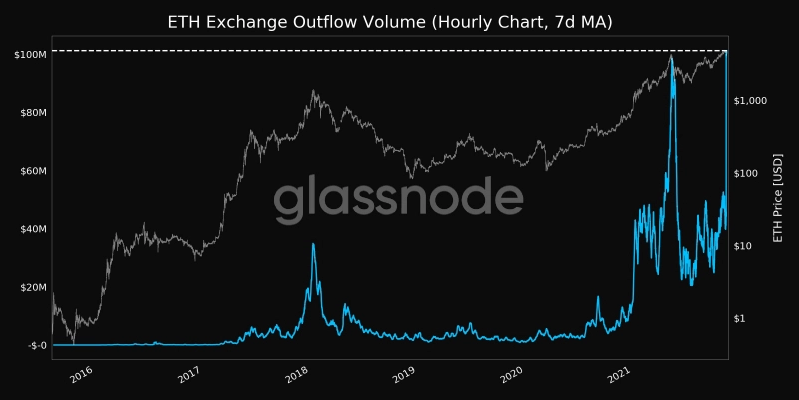 The previous all-time high was attained in the middle of the year. After a huge correction hit the market, Ethereum lost 55% of the value it previously gained. The bearish cycle preceded the increasing exchange inflows, representing the presence of selling power.

As soon as the market started to recover its losses, exchange outflows started to increase, as Ethereum investors hold back from selling their positions.

The current data now shows that traders have not yet started to sell their holdings, which could turn out to be a strong positive position for the market.

Former Goldman Sachs executive, Raoul Pal, has reaffirmed his bullishness on Ethereum (ETH), the second-largest cryptocurrency by market cap, stating that he expects the cryptocurrency to surge at least 100% before the end of the year.

In a tweet on 17th November, Raoul Pal updated his comparison between Ethereum this year and Bitcoin in 2017 to show that the correlation is so obvious.

Raoul Pal tweeted, “I have been showing this spooky chart of ETH now vs BTC in 2017 in various forms. This is my live CIX on Bloomberg…. even nailed this sell off….to the day and price. What happened next? A 300% rally. From tomorrow (ish).”

I have been showing this spooky chart of ETH now vs BTC in 2017 in various forms. This is my live CIX on Bloomberg…. even nailed this sell off….to the day and price. What happened next? A 300% rally. From tomorrow (ish). 1/ pic.twitter.com/GZiStl4hmG

Pal pointed out that he does not expect perfection from the analysis. However, he believes “something like a 100% to 300% rally is highly probable into year-end. It’s a tougher call but I think it possibly elongates and sees significantly higher prices.”