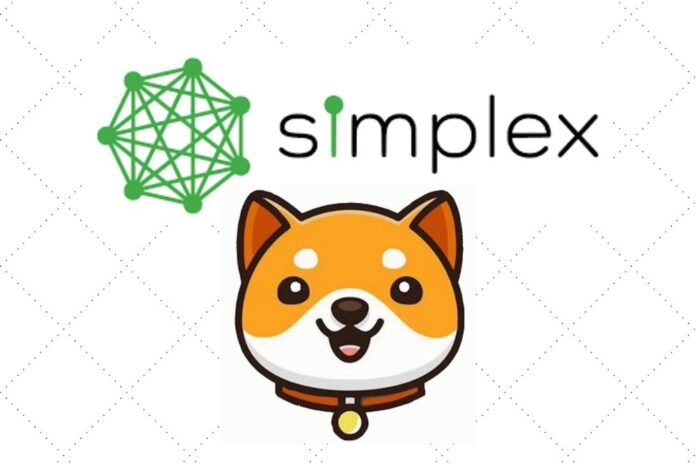 Baby Dogecoin (BabyDoge) has officially sealed a partnership with Simplex, to allow users to purchase BabyDoge directly on BabyDoge.com.

The new development was announced a couple of hours ago via the official Twitter handle of BabyDoge. According to the report, Simplex is also in partnership with top crypto exchanges, including Binance, Kucoin, Huobi, among others, serving as proof of being trustworthy.

BabyDoge team tweeted, “We are proud to have officially partnered with Simplex to allow users to purchase Baby Doge with card directly on BabyDoge.com. Simplex is also partnered with top exchanges like Binance, Kucoin & Huobi Global among many others!”

We are proud to have officially partnered with @SimplexCC

to allow users to purchase #BabyDoge with card directly on https://t.co/cnV9p28UZP@SimplexCC is also partnered with top exchanges like @binance @kucoincom & @HuobiGlobal among many others! pic.twitter.com/AV1FHzipSe

Before the latest partnership, BabyDoge could only be purchased via PancakeSwap, Uniswap, or centralized exchanges such as Gate.io, OKX, Lbank.

So, via the new partnership, a credit card option has been added as a new buying method on BabyDoge’s official website.

Simplex is the industry leader in payment processing services. Users on Simplex can buy over 130 digital currencies through its network of partners. It also often launches support for more currencies, with over 115 fiat currencies listed for its users.

The firm is licensed to enable its vast network of partners to accept a wide range of payment methods, such as MasterCard, Visa, Apple Pay, SWIFT, SEPA, and lots more.

Simplex aims to make sure cryptocurrency is accessible to all and sundry. As aforementioned, Simplex is in partnership with major and reputable exchanges, such as Binance, KuCoin, Huobi, among others, to boost its trustworthiness and make its dream a reality.