Cardano has managed to rally over 30% within the last 24 hours, making ADA become the highest performer among the top 20 cryptocurrencies, amid the anticipation for the Vasil Hard Fork implementation. 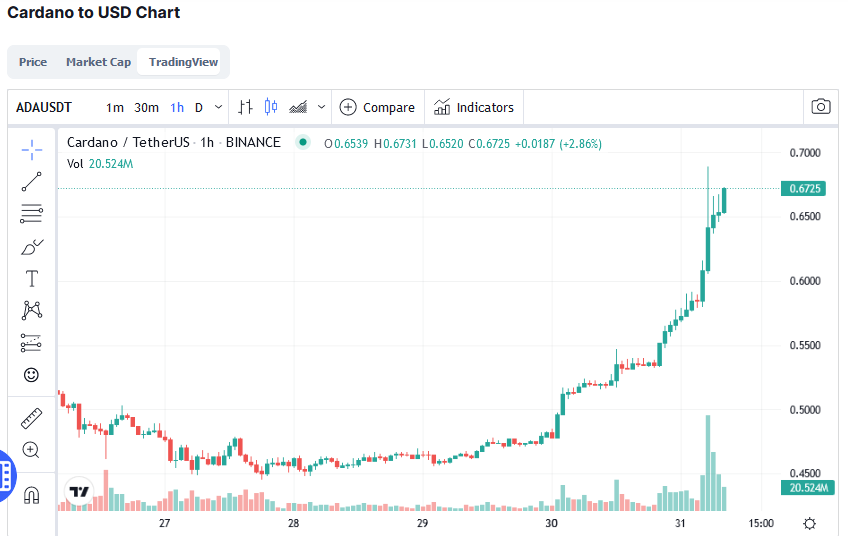 Why Charles Hoskinson Is Excited About Vasil Hard Fork

In the video where many other developments about the Cardano ecosystem were discussed, Hoskinson said:

“As many of you know, a major major major hard fork combinator event is happening in June, which is the Vasil hard fork, and that is going to contain pipelining, which will be a massive performance improvement to Cardano, alongside the first wave of significant Plutus enhancements since Plutus shipped in September.”

Also, in February, John Woods, the director of Cardano Architecture at IOG, published a blog post in which he described the concept of Cardano pipelining.

“Pipelining is, effectively, an evolution in Cardano’s ‘plumbing’. It is a key element in our scaling plan this year, one in the series of published steps covering our methodical approach to flex Cardano’s capacity as the ecosystem grows…

“Pipelining – or more precisely, diffusion pipelining – is an improvement to the consensus layer that facilitates faster block propagation. It enables even greater gains in headroom, which will enable further increases to Cardano’s performance and competitiveness...

“Pipelining is just one of the pillars supporting Cardano’s scaling this year. Combined, all these changes will lead Cardano to a position where it is faster than its competitors, and a highly competitive platform for decentralized finance (DeFi) this year.”

It should also be noted that Hoskinson had once stated that many Cardano decentralized finance (DeFi) applications are waiting for the implementation of the Vasil hard fork, which will directly impact the growth of Cardano’s Total Value Locked (TVL).